Today I had a doctor’s appointment to follow-up on my blood tests from 2 weeks ago.  It was for my inflammation markers, iron levels, thyroid and vitamin d. I also wanted to see if this new doctor would actually listen to me and my symptoms rather than just dismissing me with yet another prescription for painkillers, or telling me that all my problems are just because I’m fat.

I’m pleased to say that she took me seriously and i felt like i was heard this time.

My inflammation markers are raised (not a surprise), my vit d levels are low (also not a surprise) and my thyroid levels are lower than expected (a surprise).  I had a thyroid test about 6 years ago and it came back as being slightly under active, but this time, the doctor thinks that the readings are low enough to warrant other blood test in 8 weeks and starting possible treatment.  When I got home, i did what any spoonie usually does and Googled hyperthyroidism.  The list of symptoms knocked me a little sideways because holy shit, if that ain’t me: 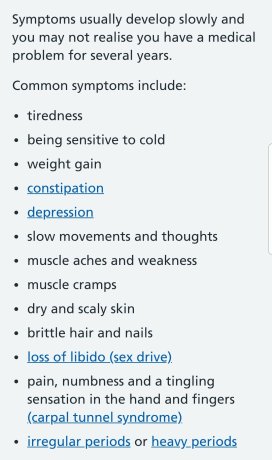 I have every single thing on the list bar brittle hair & nails and hearing loss/  I had assumed that the low [itched and hoarse voice was due to a 20 year smoking habit (smoke free for 2 years now) and my COPD but….. maybe not.

The doctor also booked me a spinal x-ray for tomorrow afternoon to see if there are any differences in my arthritis from the last one back in 2016, and she also referred me to the muscular-skeletal clinic. All if this is more progress than I’ve made in around 18 months and when I got home, i may have had a little cry about it.

I also decided to tell the doc about my recent discovery of CBD oil and how it’s been helping me and she was totally cool with it. She said that a lot of her patients who suffer with chronic conditions have started to use it and she’s quite happy with that.  She says that it helps people to cut down on the amount of prescription painkillers they need, which is a good thing.  I have to say, I agree with her on that. I hate having to rely on painkillers and opiates.

So, it could well be that my issue isn’t actually Fibromyalgia but my thyroid causing the problem.  If that’s the case, then this could be a massive breakthrough. It may not be curable, but it’s certainly manageable with the right replacement hormones.

One thought on “HEALTH UPDATE: I Found A Doctor Who Actually Listened.”

Movie Reviews and Other Randomness

word vomit from one of nature's anomalies

A daily selection of the best content published on WordPress, collected for you by humans who love to read.

The Art and Craft of Blogging

The latest news on WordPress.com and the WordPress community.